Despite Jeff Bezos’s Drama, It is usual Business for Seattle based Amazon

Despite Jeff Bezos’s Drama, It is usual Business for Seattle based Amazon 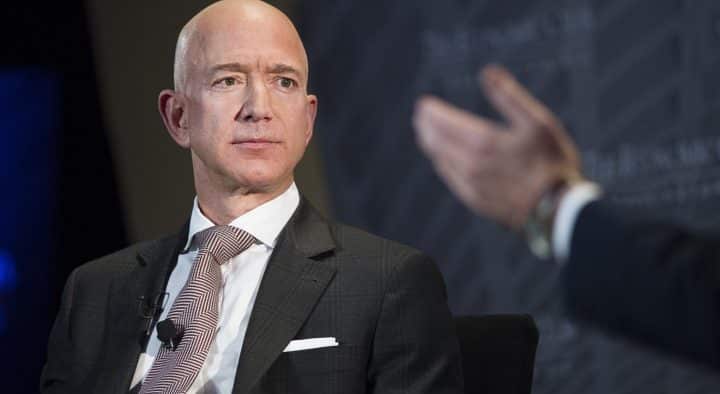 The news of the most expensive divorce that is going to happen between the Amazon founder and his wife was a quick hit over the internet. Just after the news broke in, a tabloid revealed that he’d been having an affair, releasing texts and photos of him and his mistress. And adding to these recently Jeff has accused in a blog that the National Enquirer is trying to blackmail him by threatening to release more intimate photos of him if he does not call off an investigation into how that information was obtained in the first place.

But despite all these negative things happening in the life of Jeff, Amazon is having a usual business day.  As per analysts and experts, these scenes would not have much effect on Amazon, the company Bezos has steered from an online bookstore two decades ago to a worldwide juggernaut.

Michael Pachter, an analyst at Wedbush Securities, estimates the impact of the drama on the company would be “0.000 percent.”

Other said Bezos is quite efficient at multi-tasking. He has been able to balance his responsibilities at the helm of the world’s largest online retailer while also juggling his other pursuits: running a space exploration company and being the owner of one of the nation’s most influential newspapers, the Washington Post.

Chris McCabe, who used to work at Amazon and now runs ecommerceChris, a consultancy for Amazon sellers says, “He’s extraordinarily driven, he knows how to delegate.”

To keep the investors calm, Amazon has a steady line of long-time executives who are running each of its businesses.

Still, there have been doubts by the Enquirer looming over Jeff Bezos’s efficiency at the moment on overseeing his company.

An article by the tabloid states, “All of these (text) messages raise serious questions about Bezos’ judgment as the CEO of the most valuable company in the world.”

However, the Seattle based e-commerce giant, Amazon did not comment on Bezos. The company’s stock also has not affected much. It slipped by 1.6 percent only at Friday’s close.

Meanwhile, the Enquirer’s publisher, American Media Inc., is denyingBezos’ claims that Enquirer used “extortion and blackmail” in reporting its story. It said the firm has acted lawfully.

In a blog post defending his ability to lead Amazon he wrote, “I founded Amazon in my garage 24 years ago and drove all the packages to the post office myself. Today, Amazon employs more than 600,000 people, just finished its most profitable year ever, even while investing heavily in new initiatives, and it’s usually somewhere between the #1 and #5 most valuable company in the world. I will let those results speak for themselves.”

He also added he wants to focus on work as he had hired a person to handle the investigation into how his texts were leaked to the Enquirer, he will also be tasked with “protecting” his time.

Bezos wrote, “I have other things I prefer to work on.”

However, Bezos’ decision making inefficiency, unlike Tesla’s CEO Elon Musk, is only seen on the context of personal relationship not on the management of the company. It should be noted that Elon Musk’s behavior has caused the electric automaker’s stock to rise and fall. Musk has recently been removed of his chairman seat and asked to pay a $20 million penalty to the SEC (Securities and Exchange Commission) for allegedly misleading investors with tweets about a plan to take the company private.

Neil Saunders, the managing director at GlobalData Retail, of Bezos’ affair, says, “This is very much a matter of Jeff Bezos, it’s not really anything to do with running with the company.”

David Larcker, a professor at the Stanford Graduate School of Business, says it is entirely on the shareholders and the board of directors to judge and decide how the CEO is engaged in his work and whether he should step out. Bezos is the chairman of the board and the largest shareholder of the company having a 16 percent stake.

Amazon shoppers are unlikely to be affected by these dramas.

Scott Galloway, a marketing professor at NYU Stern School of Business, says, “I think as long as people can get their Nespresso pods within 48 hours, they don’t care.”