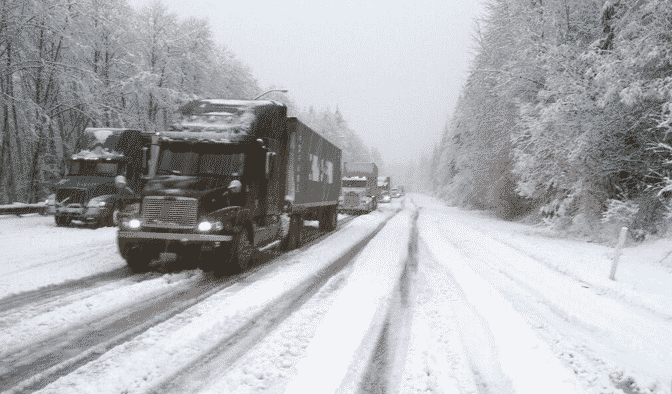 Heavy snow has created many problems on I-90 over Snoqualmie Pass, as conditions continued to get worse overnight.

Chains were used for most vehicles and officials said that the eastbound lanes would close for avalanche control at 4 a.m.

It was a complete snow filled scene which had a flipped car on its side, and weary road crews working around the clock to prevent.

However, snow has still been stacked up on side streets around Snoqualmie Pass.

As per the crew, last Tuesday, they recorded 31 inches of snow near Hyak — the most snowfall in 24 hours on the pass since they started keeping records in 1973.

With snowplows, graders, blowers, and salt, crews had already been busy working I-90 Tuesday night as snow intensified.

“We’re all tired,” said WSDOT Crew Supervisor Jerry Mus. “We’ve gone from our families and all of that, but everybody is here, guys even on their days off come up here because they enjoy the work. It’s a challenge, it’s fun, and we take pride in the work we do on this road.”

The road has been declared tricky to travel.

A driver, Peter Kalbfleisch was gassing up for their drive to North Bend in case the pass closes again.

“It’s not easy to travel in, and I know we have to be safe,” said Kalbfleisch. “But when it comes to recreation and sharing the fun with friends, it’s one of the purest things we have.”

Crews said that they were as safe as the drivers traveling on I-90.

They advised the drivers to give them some room and some patience during the snowy commute.

Previous Article
Sen. Bernie Sanders to Contest in the 2020 Presidential Elections
Next Article
Tim Eyman Charged with Misdemeanor Theft; His Attorneys Calls it an Accident