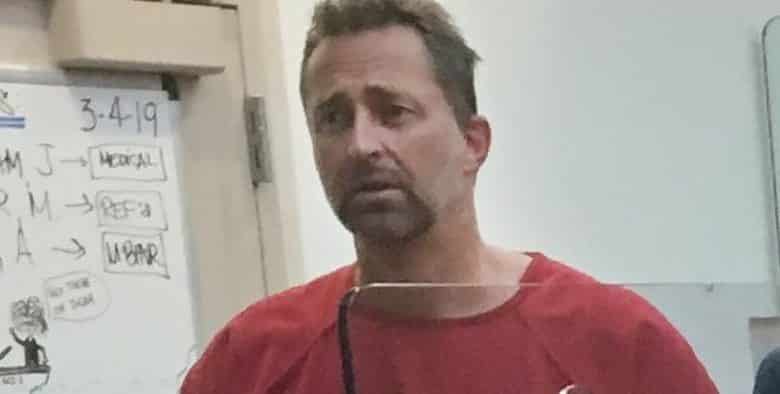 Joseph Shaun Goodman was arrested on the allegations of driving under the influence, and this will be his eighth impaired-driving arrest in 26 years, as per Police. He was tracked by following a “debris trail and grooves in the sidewalk” left by his Audi, which was missing a tire.

Joseph, 47, is the owner of Vantage Communications and he was arrested shortly before midnight Saturday after he allegedly crashed into a sign at the end of Bay Street, off Elliott Avenue. He reportedly left his car and hid near a stairwell in an alley, according to the Seattle Police Department. As per officers, they detected a “very strong odor of alcohol” on him.

A report was raised by a witness that the driver of an Audi SUV had run a red light and was driving with one tire missing and the car scraping the ground, police said in the incident report. Goodman pleaded not guilty in Seattle Municipal Court on Monday as he was charged with driving under the influence, hit-and-run involving a parked car, and driving without an interlock device. An ignition interlock analyses the driver’s breath and prevents a car from being started if alcohol is detected. It has been added to his car after a previous conviction.

Judge Willie Gregory was setting up the bail at $250,000 ordered Goodman to be placed on electronic home monitoring with a device that detects alcohol in the wearer’s perspiration. He was not available for comments.

His last arrest was in December 2013. He led police on a 100 mph chase through downtown Olympia, with a passenger screaming and begging to be let out, before he crashed his silver Ferrari into a parked car and a home.

The case made to headlines, after he was sentenced to 364 days of work release from jail after a judge determined that a more restrictive sentence would harm his small telecommunications business along with his employees and the community. As per the work release, Goodman was allowed to go to work but spent weeknights and weekends in jail.

As per the critics’ claim, Goodman’s wealth got him preferential treatment and a lax sentence. There were outrages as well when he was allowed to attend the 2014 Super Bowl in New Jersey while his criminal case was pending.

As per Washington’s law, his last DUI was a misdemeanor, not a felony. In Washington, a person can be charged with felony DUI, which carries jail or prison time, if they have been convicted of three prior DUIs in 10 years.

It should be noted that the state legislature is now considering Senate Bill 5299, which would allow prosecutors to charge someone with felony DUI if the person has had three convictions for impaired driving within 15 years, rather than 10.  Amy Freedheim, a King County senior deputy prosecuting attorney, says she supports the new proposal.

“Repeat DUI offenders are the most dangerous criminals out there. Motor-vehicle crashes are the sixth-leading cause of preventable deaths, and they are on the rise in our state,” Freedheim said. “There is no excuse in 2019 not to use Uber, and anyone who is on their eighth DUI knows that.”

As per Police, his Audi SUV was found on Saturday night at the end of Bay Street, where it had come to rest in the railroad right-of-way.  The vehicle had heavy damage to the front end, the front axle was snapped, the right front tire and hub were gone, and brake fluid was leaking, police said.

An employee with railroad directed officers to an alley, where police say they found Goodman in a stairwell. As per Police, they smelled alcohol on Goodman’s breath and body, and his face was flushed. As per Godman’s initial claim, he had not been driving and began to “whimper and cry” while being taken into custody, police said.

He also told the officers that he had consumed three glasses of wine at the Seattle Sounders FC game, but he believed he was “fine to drive.”

A check by the Police revealed Goodman’s previous DUI convictions and that he was required to have an interlock device installed on any car he drives. But Police reported that there was no interlock on the Audi.

According to the Police statement, while one officer was doing field-sobriety tests on Goodman, another began an “area check to find out what Goodman had hit.” That officer reportedly found a parked vehicle on First Avenue that had been struck. As per security video, the Audi SUV was running into the parked vehicle and heading north.

“By following a debris trail and grooves in the sidewalk from Goodman’s hub, (the officer) determined that after hitting the parked car, Goodman went north on First Avenue,” according to the police report. After that, he turned east on Broad Street, went down an alley, and passed over Clay Street, where his tire was found. As per Police, he continued over Cedar Street, where he hit a concrete wall, on Vine Street, Wall Street, Western Avenue and back onto Broad Street before turning on Elliott Avenue and finally Bay Street.

Police said he “seemed to have no idea the danger he caused to the public on this particular evening.”