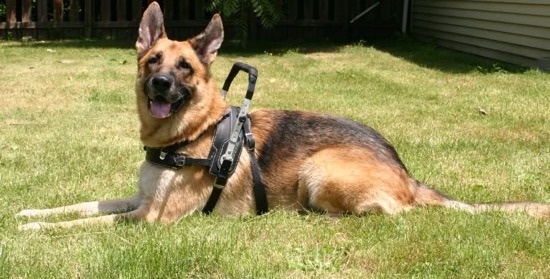 A retired dog has been the bone of contention in two separate federal excessive-force lawsuits filed by men who were bitten during arrests by the department during 2016. The dog was once decorated after being stabbed during a confrontation with a domestic-violence suspect.

The K-9, a German shepherd, named Kato, and his handler, Officer Eric Tung, are the accused in both the lawsuits which allege causing serious and unnecessary injuries to the men, neither of whom was armed. As per both the men, they were not resisting when the dog was loosed on them, according to court documents.

It should be reported that the first accident happened in February 2016 and involved officers attempting to serve a misdemeanor warrant on a man named David E. Lewis Jr., a registered sex offender with an extensive criminal history.

And the second one involved the arrest in June 2016 of Aubrey Taylor by Kent police and federal agents in the parking lot of a hotel in Kent. Taylor has filed his handwritten lawsuit “pro se.” It means, he doesn’t have an attorney, from the Federal Detention Center in SeaTac where he is being held pending trial on federal charges of sex trafficking of a minor.

According to the court documents, Tung and Kato also were named in a third lawsuit, filed in March 2016 in King County Superior Court, for negligence after the dog bit a bystander outside a Kent tavern after being let off his leash to pursue a thief. However, that case got settled for $45,000 following mediation, said Geoffrey Grindeland, a Bainbridge Island lawyer who represented the city.

According to assistant Chief Jarod Kasner, the department has been served with at least one of the recent lawsuits, but that he didn’t have enough information to respond otherwise.

The Kent Police Department records show that Kato was retired from the force in January 2018.

As per News reports, the K-9 was seriously injured when he was stabbed while pursuing a suspect in a domestic violence assault. After that concerned citizens raised enough money to purchase a protective vest for the dog.

As per one lawsuit, Lewis, 56, claims he was walking near 25800 Pacific Highway South in Kent around 2 a.m. on Feb. 18, 2016, when he was cut off by a Kent police car driven by Officer Eli Morris, who exited the vehicle and reportedly told Lewis that he had a warrant for his arrest. Morris allegedly pulled out a Taser as Tung, his K-9, and two other officers drove up and boxed Lewis in with their vehicles, according to the lawsuit.

Lewis “did not exhibit any signs of aggression or resistance,” and carrying a jug of laundry detergent in one hand and his cellphone in the other at that moment. And the lawsuit alleges Tung released Kato and directed him to attack.

“The unnecessary and unexpected use of the K-9 startled Plaintiff, who was terrified by being attacked by the powerful animal,” the lawsuit said. It also claims he reacted by stepping back and trying to fend the dog off with the jug of detergent and that actions he said prompted the officers to charge and take him to the ground, the lawsuit said.

As per the lawsuit, Lewis was shot with the Taser and struck in the head with a 13-inch metal flashlight as the dog tore at his leg. It also alleged that the officers downplayed the severity of his “apparent minor injuries.”

As per Lewis, he suffered severe lacerations — the largest nearly 4 inches long — and deep puncture wounds that required an ambulance trip to the emergency room and stitches.

The lawsuit also alleges that the dog was in such frenzy that it bit one of the officers as well.

According to one of Lewis’ Seattle attorneys, Jordan Taren, the arrest warrant alleged a fourth-degree assault. Lewis was later charged additionally with resisting arrest and offenses against a police dog. In a November 2016 trial, a hung jury occurred, and the case has been repeatedly delayed since.

As per Taylor’s handwritten claims, he was walking through the parking lot of the Hawthorne Suites in Kent, smoking a marijuana joint, carrying a duffel bag and talking on the phone when numerous armed officers appeared and ordered him to the ground. Taylor also has an extensive criminal history, and he said he was confused “because he was in good standing with his bail bondsman,” but was in the process of kneeling when he was attacked by Kato, who bit his legs and back.

As per Taylor’s claims, he “begged the officers to get the dog off of him,” pointing out that he was not armed, did not attempt to flee and has no history of eluding police. “None of these charges constitute as violent crimes, yet officers used excessive force” during his arrest, according to the lawsuit.

Police dog bites have cost the city a huge sum before. Over the years the Police department has paid more than $1 million for the settlement of these cases.