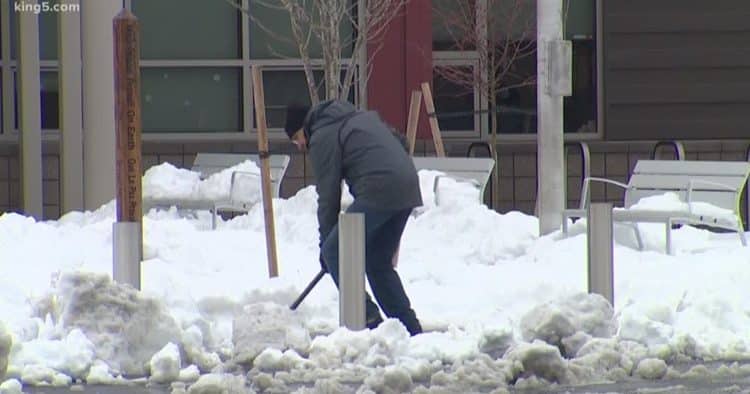 When a series of snowstorms struck Seattle City that brought the Puget Sound region to a standstill, staff and volunteers at Northshore School District ventured out into neighborhoods and mobile home parks, knocked on doors and delivered 2,500 meals to families this week.

“Monday morning, I saw somewhere on the national news that there were a lot of food-insecure families that struggle when schools are closed,” said Lisa Youngblood Hall, communications director for Northshore School District. “So I called [the superintendent], and we started planning.”

“It started off with both of us saying, let’s put the word out. We have all-wheel drive,” she said. “We brought in our food services director, and then it just blew up.”

It should be reported that the same day they opened up a middle school to serve hot meals, prepped by staff eager to help. Families who were not able to reach the school were delivered food. And when the district nonprofit Northshore Schools Foundation was notified, it pulled together food from local restaurants.

In a week of canceled and delayed school that wreaked havoc on parents’ schedules, the 23,000-student district’s speedy meals-on-wheels plan became successful. But after midwinter break this week, Northshore — which clocked eight snow days this month — and other districts will have to adjust their schedules to make up the days, and take stock of their winter weather protocol.

Districts are evaluating their options to make up the missed days due to snow. Puyallup School District, Northshore School District, and Tacoma School District are planning to apply for snow-day waivers from the state education office. The exemptions will allow districts to omit makeup days so long as they don’t fall short of the state’s minimum instructional-hour time requirement for the school year.

However, many districts already have a couple of snow days built into the school year. Seattle, with five days to account for, is tapping its built-in snow days and is considering an application for a waiver. A spokesperson said that the high school graduation days have been kept on hold.

The strike by teachers in Tacoma, which knocked off a week from the beginning of the school year, won’t have a bearing on how snow days will be made up. Officials at the Tukwila School District have used one of three built-in snow days to make up for the first day of their teacher strike. The district also has used its midwinter-break days to cover the remaining strike days. As per a spokesperson, they’re holding off on making any recommendations for changes now.

“When a winter storm hits, or any other major event, the thing to remember is that school closures are what trigger other closures,” said Cate Brewe, a Seattle-based licensed mental health counselor who works with food-insecure and homeless families.

Brewe said that also could mean food banks are closed, too, which is why Northshore’s delivery approach was so helpful. Families that depend on the free and reduced-price lunches their children receive at school “often have no flexibility.” As per Brewe, she recently had to remotely pay for a grocery store gift card for a family in Everett that was “down to a couple of cans of green beans and bread” during the storm.

As many preschool and child-care facilities also tying their schedules to schools, no classes were a hardship for working parents.

“To care for our children while there is no school, either my husband or I have been staying home if possible,” said one reader who responded to a Seattle Times survey about the city’s response to the snowstorm. “Or we have been trading off with neighbors.”

Many in the survey also questioned Seattle Public Schools’ reasoning for shuttering schools Wednesday and stated seeing snow on sidewalks in front of schools when the district reopened Thursday.

Stephen Nielsen, deputy superintendent of the district and the person who makes the final call on snow days, said Seattle Public Schools officials acknowledge a number of factors before canceling school.

As per him, the district has a limited number of custodians, “and very little money to run around making sure our walkways is clean.” Almost one-third of the district’s teachers live outside of the city, too, and buses need to be able to drive up to curbs safely. Hazards on side streets and walking paths to school are also considered.

“Safety is a concern. We don’t want anyone hurt or worse on the way,” he said.

Another parent Ayan Elmi appreciates the district’s caution, but also criticized how the district has handled transportation for special-needs students on late-start and early-release days.

Elmi along with other parents of students receiving special education services were unaware that families had to opt-in to receive bus service on snow-route days through a form. As per her, her son, Zakaria, who has autism, and her daughter, Safiyo, ride a special education bus to Dearborn Park International School.

She also does not have a car, so when a bus doesn’t come, her kids can’t attend school. As of now, they have missed five days.

“I get the homework from teachers, and we do drawing and painting, I have a whiteboard — but there’s only so much you can do being cooped up in the house,” she said.

It should be reported here that parents were required to fill out a form in October to receive special-education bus service on snow days. After complaints from many parents that they did not know of the process, the district resent the form and allowed parents to submit a request again.